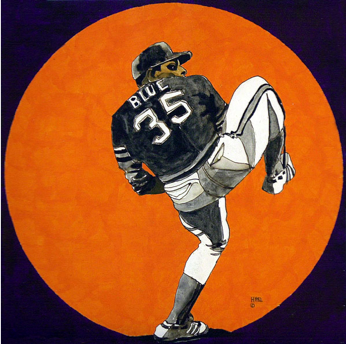 Paintings by Earl Hubbard express the meaning of democracy and what it is to be an American through the eyes of an artist. Portraits and images were how he animated a period of American history from the time he served in WWII in the early 1940s to 2003 when he passed. Hubbard was deeply impacted by what he referred to as “the new capacities” that technologies provide, especially those with the power to destroy life on a massive scale, which he witnessed firsthand at the end of the War. From then on he understood “the challenge is freedom,” to both celebrate and cherish what is unique about the American spirit as well as take a stand to ensure technologies will serve the greater good for the most people. This purpose literally stretched his imagination when pondering the significance of Project Apollo in the 1960s: humans suddenly had the capacity to leave Earth’s atmosphere and land on the Moon. He articulates a bold purpose in his book, Our Need for New Worlds: A Declaration of the Right of Mankind to Have A Future (1976). On the back of the book, he writes about the space program.

A program of hope for all who are concerned about increasing threats of food shortages, ecological destruction, population pressure, and nuclear disaster.

This concern would not have been possible, however, if he did not love what was called American folk art. He identified with its history; he saw himself part of it and he appreciated its free-spirited expression. Comic strips, cartoons, Hollywood movies, even the first advertisements on television––all captured his as well as the country’s hopeful and somewhat naïve spirit of mid-20th century America. The List of Periods and Artistic Subjects features fourteen phases of his artistic career—through portraits and colorful images of the evolution of small town America, such as Millerton, New York in the 1950s, to the digital age—right before his death, with his visual abstract vector portraits.

Read the complete description of periods and subjects: Earl-Hubbard-periods