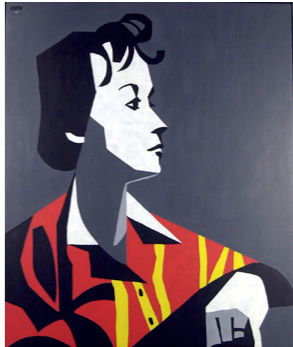 Discovering that I inherited an important missing page in art as well as American history, in addition to more than 400 paintings, was unexpected. It was my father Earl Hubbard’s wish: the content of his studio would go to his five children. Fifteen years after he passed, my son and daughter travelled along with my husband and me to Connecticut to take inventory of the legacy he left behind.

Reflections on Her Father is the story of my realizing his art is much more than a family heirloom. The essay contextualizes this by connecting his very American ideas with his portraits and images ––animated expressions of the times. His maverick nature was an example of the Americanism he painted and thus both his life and art were cultural artifacts of the period between the late 1940s and 1990s.

Being his daughter, my association is more with the emotional toll his complete dedication to his work had on me personally. I returned to his studio not only as his child, but as an artist with my own sense of possibility and with an adult view of the world. He was painting the image of what could be. Its realization remains a lost history, however; our current period of chaos was presaged by the kinetic art of the Abstract Expressionists in the ‘40s through the ‘60s. I feel closer to him for his practical imagining what is possible based on what is working.

I am loath to sell pieces from his collection–together they compose a visual ecosystem of American thought. Yet I will consider it, to spare paintings from the fate of eternal storage. Ideally a museum, university, or collector will be interested in the collection. The art of Earl Hubbard offers a hopeful history–not nostalgic but still waiting to happen. A Daughter’s Reflections on Her Father weaves the threads of the fabric of this context, bringing greater appreciation to the true value of his work. Those who become inspired may then weave a whole human tapestry reimagined–maybe from space.

Contact me at suzannehubbard.com and donate to the Earl Hubbard Legacy Project.